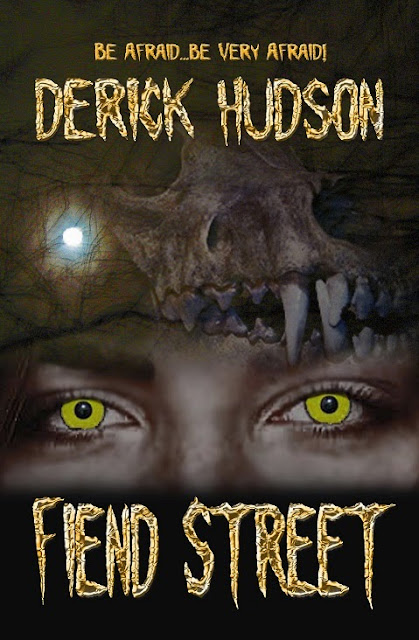 PLOT
After centuries hiding away in coffins, forests and ram-shackled dens, the vampires, werewolves, witches and warlocks are now living secretly among us. This is the story of Jack Celby, the hormonally charged teenage son of vampire parents, who lives on or as it is affectionately known to many of its residents, as over half the population living there are descended from those who sucked blood, howled at the moon or stirred their stinking concoctions in steaming hot cauldrons.

All is not well on . Although Jack, his parents and all the ‘irregulars’ have successfully assimilated into normalised society, they now face a terrifying battle against the mongrels, a blood-thirsty race created from the poisonous union of deviant vampire and werewolf blood.

The disciples of the Black Coven of Windermere have been summoned to exact a swift and bloody revenge over a heinous incident. A young werewolf child has been kidnapped, perhaps even slaughtered, and all the witches’ cats have been horribly mutilated in a barbaric attack that can signify only one thing: the mongrels are uprising and no one is safe, especially Makayla, Jack’s mongrel girlfriend.

5.0 out of 5 stars another good one for derick , 23 July 2014
By
lesley bradbury - See all my reviews
Verified Purchase(What is this?)
This review is from:  (Kindle Edition)


so glad I found twitter otherwise i don't know how long it would have taken me 2 discover derick & his books there are so many other authors 2 pick, iv always liked this kind of book but it was all geting same'y!! but this book & three others iv read r a breath of fresh air 4 me (sounds silly what with the content of the books) just somethings off & odd which I like in a book, I don't want 2 b able 2 work the end out on the 1st page!! anyway try it im sure u'll enjoy.


5.0 out of 5 stars Gory Goodness, May 1, 2014
By
M. Nesbitt ( , NEW JERSEY, ) - See all my reviews
Verified Purchase(What's this?)
This review is from:  (Kindle Edition)
I just finished reading , and I have to say as an avid fan of horror (movies and books) with gross gory imagery, this book didn't disappoint. I love the werewolf/vampire hybrid thing...very cool. The characters were well developed and the story line excellent as always. I almost lost my lunch (literally) reading a specific scene and I have a pretty strong stomach. But, call me weird because I still found it one of the best parts of the book lol!! I REALLY hope that there will be a sequel for this one : )


5.0 out of 5 stars a stomach churning great read, 21 Jan 2014
By
karen d - See all my reviews
Amazon Verified Purchase(What is this?)
This review is from:  (Kindle Edition)


This book is about vampires, werewolves and witches all trying to live in one street blending In alongside mere mortals. never one to shy away from gruesome it has abductions, murder, cat mutilation and goat eating. A stomach churning great read!


5.0 out of 5 stars So Long Twilight December 15, 2013
By Carolyn
Format:Paperback|Amazon Verified Purchase


Having read all of Derick Hudson books, I can categorically state he is a truly amazing talent. is written with humour yet delivers all the scariness and blood curdling horror expected of a capable writer. If you are at all worried about his perceived genre-hopping, don't be. It is his skill that makes me crave more of his work. ( sequel would be awesome!) There are no words to describe what he delivers. Read & his other books to see what I'm talking about. Genre-hop as often as you wish Mr Hudson. Just always write!!


5.0 out of 5 stars An all rounder 7 Dec 2013
By Noortje
Format:Paperback
This book does not fail to deliver fast paced action in a fantasy world ! Sparkling vampires? No thanks Twilight, keeps with the dark tones supernatural beings bring with them !

5.0 out of 5 stars Different 28 Nov 2013
By lormart
Format:Kindle Edition|Amazon Verified Purchase
In keeping with the trend for vampires and werewolves etc., once again Derick Hudson has excelled himself. He has this knack of getting readers engrossed in the character. This book was different, yes there was humour, there was romance, Jack and Makayla, and there was plenty of blood, guts as well. Another good read, thank you Derick!

Get Dysfunctional Romance 'The Break-Up!' here:

Derick Hudson on LinkedIn (Top one percent viewed site in the world!)

Derick Hudson on Goodreads (Highest number of followers in Ireland!)

Translate my blog into your language!